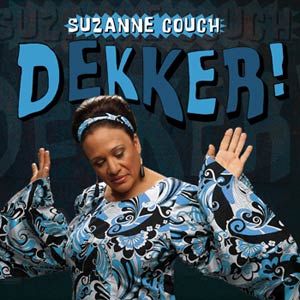 Suzanne Couch is a singer, pianist, and songwriter who writes wonderfully nuanced songs of love in the contemporary world, and although the lilt and rhythms of her native Jamaica are defintely present in her work, she is first and foremost an R&B singer with a pop reach and a jazz range.

She began playing piano at the age of four, and studied the instrument under Audrey Cooper at the Jamaica School of Music from 1974 to 1976. In 1978 she left Jamaica for the U.S. to study piano at the University of Florida, and when she returned to Jamaica in 1980, she joined the band Native as a keyboard player.

Native also included her husband Peter Couch and lyricist Brian Jobson as members, and Suzanne and Jobson began writing songs together (including “Fortunes of Love,” which appeared on the soundtrack to Stephanie Black’s Life and Debt, a video documentary on Jamaica’s severe economic problems).

Couch has been a featured singer on several Jamaican record releases, including the vocal mix of Steely & Clevie’s “Why,” a version of the Carly Simon song that was the centerpiece of their 1990 album Soundboy Clash on Profile Records, and Monty Alexander’s Many Rivers to Cross, recorded in 1995 at Suzanne and Peter’s own Couch Studios in Kingston. Lifeline, her debut album, appeared in 2001 from Cane Juice Music, and the more reggae-influenced In the Rhythm (which she co-produced with Richard Alderson and featured the veteran Jamaican rhythm section of Sly Dunbar and Robbie Shakespeare) followed in 2005 from Canyon International.