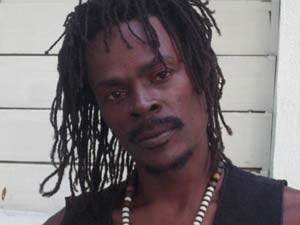 Holy Won hails from the ghetto known as Grants Pen in Kingston Jamaica where he grew up in a wooden-structured low income house surrounded by a life of poverty, despair and extreme violence.

Originally known as Daddy Irie, Holy Won released several records locally in Jamaica before teaming up with an act featuring two one legged men called Father and Son. Holy Won changed his name to ‘The Holy Ghost’ and they became Father, Son and The Holy Ghost. They had great success touring Jamaica with their show featuring music, comedy, theatrics and one-legged karate kicks.

During this time Holy Won recorded a song called ‘Prehistoric Daze’ with the group Shakespeare’s Sister for the Flintstones Movie soundtrack. This song can be found on the groups’ album ‘Long live the Queens!’ (The Platinum Collection). Holy Won also features on a song by the Reggae super group Third World called ‘Times Hard’ from the ‘Live it up’ album.

As a solo artist with the name ‘The Holy Ghost’, Holy Won received raised eyebrows from members of the church establishment. Not willing to risk eternal damnation, he changed his name to his present incarnation of Holy Won. With a new single, a brilliant cover of the Blur hit ‘Song 2’, renamed ‘Song 2 Too’ and a soon to be released solo album, the heavens are the limit for this earthbound musical soldier of adversity.