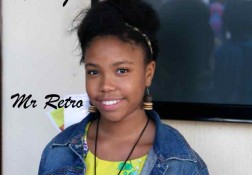 Kianja ‘ Sunshine’ Harvey (age 14) relocated last year from London to Durban. Just before leaving London, after often finding herself in lead parts for school musicals, she entered a National UK singing competition and came second. Her family realized they have a natural talent on their hands!

‘Mr. Retro’ is Kianja’s debut single (featuring Arianna Carini on guitar). It is a stunning track with RnB / Soul and Roots flavours, telling of the hardships of a struggling musician who is the object a young girl’s fancy and admiration. It was written by Kianja and produced by Paul Hussey. Out now on the independent Jambila music label.

She recently earned a music scholarship to go to Eden College Durban which proudly supports her continual striving for both academic and artistic excellence. Kianja is self motivated, committed, and is loving and enjoying every moment of her ongoing journey.