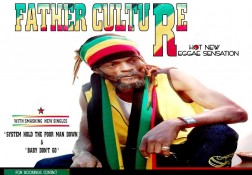 Father Culture is the real deal, born and raised in Kingston Jamaica he has been honing his craft as a Reggae artist in the dancehalls and clubs in and around Kingston since the late 80’s. He has had a couple of brushes with success but perhaps due to his unyielding conscious and cultural lyrical content, together with a distaste for ‘commerciality’ he has not as yet ‘bust out’ but like a fine wine he has definitely got better with age